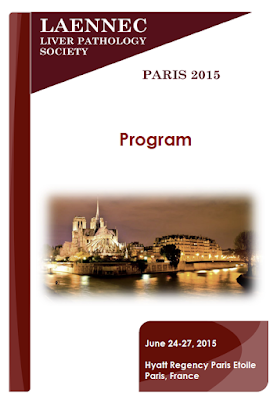 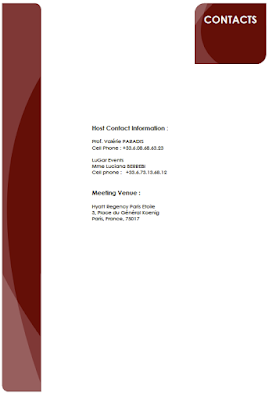 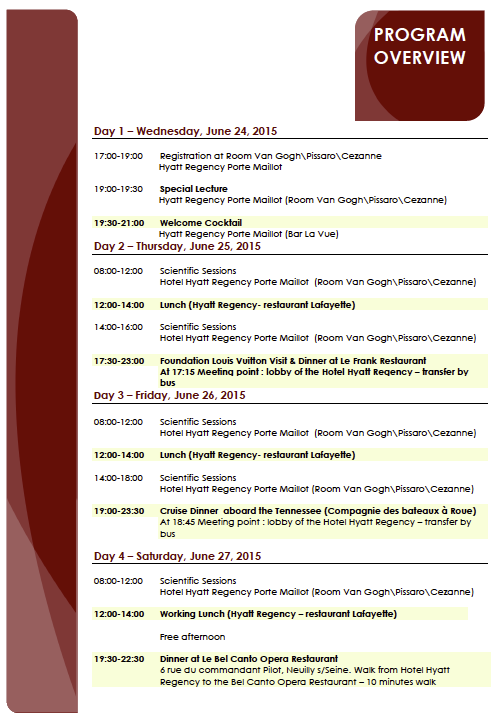 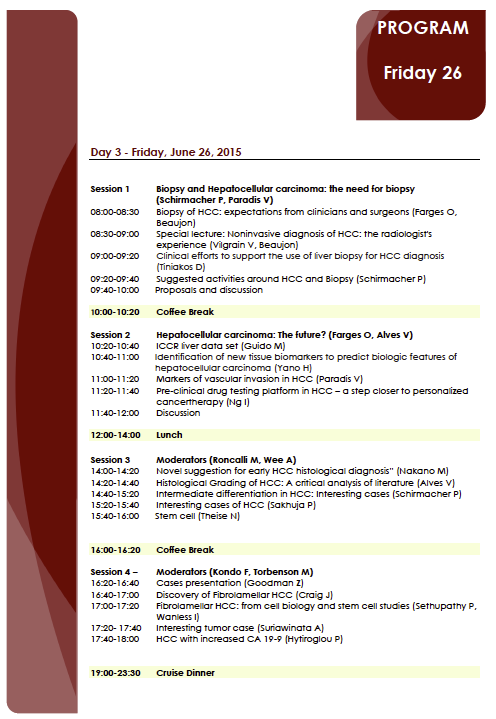 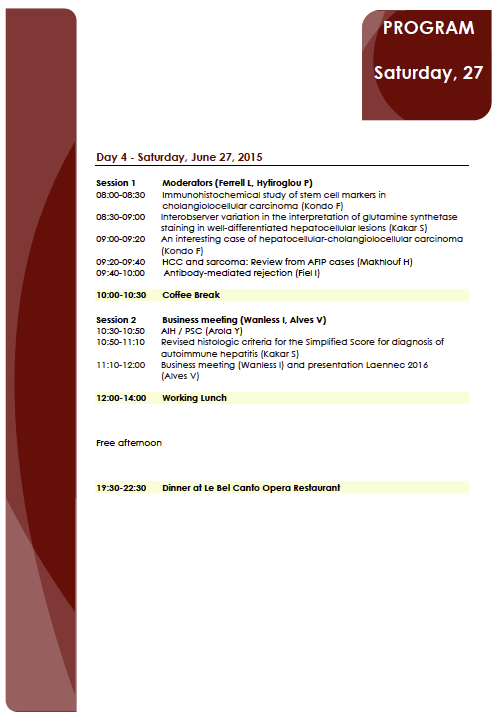 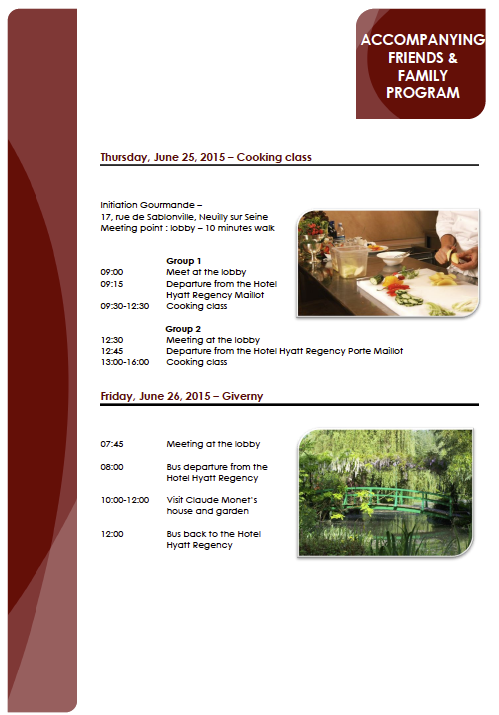 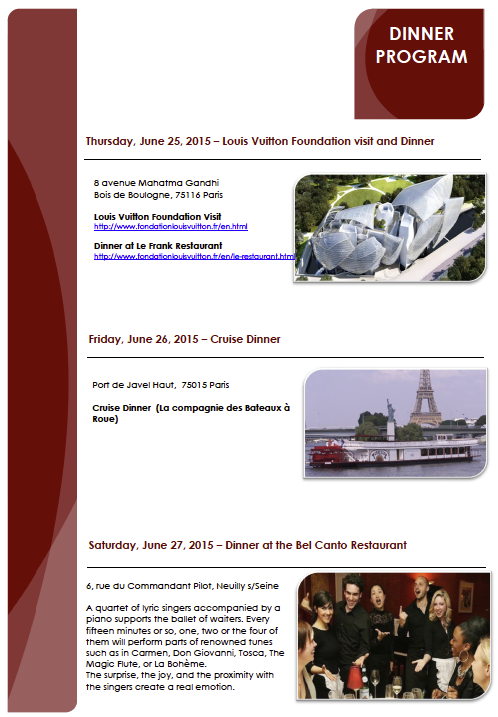 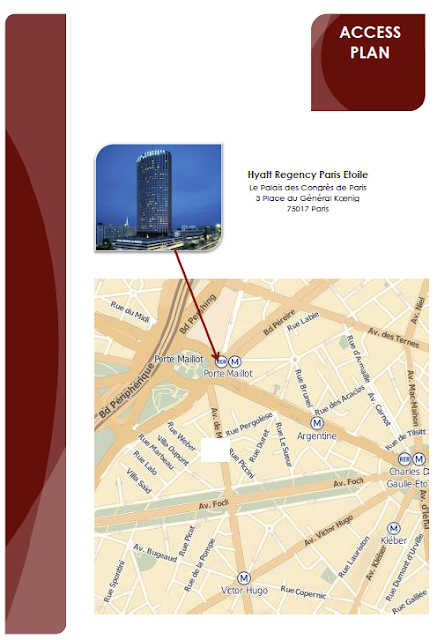 Dear All,
To make the Paris 2015 website easier to remember, I have created a subdomain: http://2015.laennecliverpathology.org/
You could reach the website by using either the newly created subdomain or the link on the upper right of our main website or the link that Luciana supplied.
See you in Paris!
Arief
Posted by Suriawinata at 10:10 AM No comments:

The 2015 Laennec Paris Conference website: https://apps.key4events.com/key4register/?e=403 is now operational. You will find all the information about the venue, preliminary Scientific and Social Programmes, and most importantly, you will be able to make your registration in advance. It is crucial for us that you register in advance specifying if you will be joining alone or accompanied, so we can book the visits & restaurants accordingly.

Just a quick note to remind you that the rooms at the preferential rate are available for reservations until April 23rd. After this date the rooms will be released and you will have to make your booking directly at the Hotel's website depending on availability and at public rates.

Thank you very much for your attention to this matter.

EASL is launching a new communication network ‘The Community Portal’ at its 50th Annual congress to beheld next week in Vienna.  One of the ‘launch’ topics concerns the role of biopsy in the management of HCC patients. My collaborator, Dr Helen Reeves, Consultant Hepatologist (Newcastle University, UK) and member of EASL GB, is the lead facilitator for this topic.

This is a "hot topic" for the Laennec Liver Pathology Society, so please follow the link below and comment. You will need your EASL ID and password to log in or you can create a new free login/password.

I will be grateful if you could disseminate the link to your clinical colleagues and other interested pathologists.

I hope to see many of you in Vienna next week!

Dina
Posted by Suriawinata at 8:44 AM 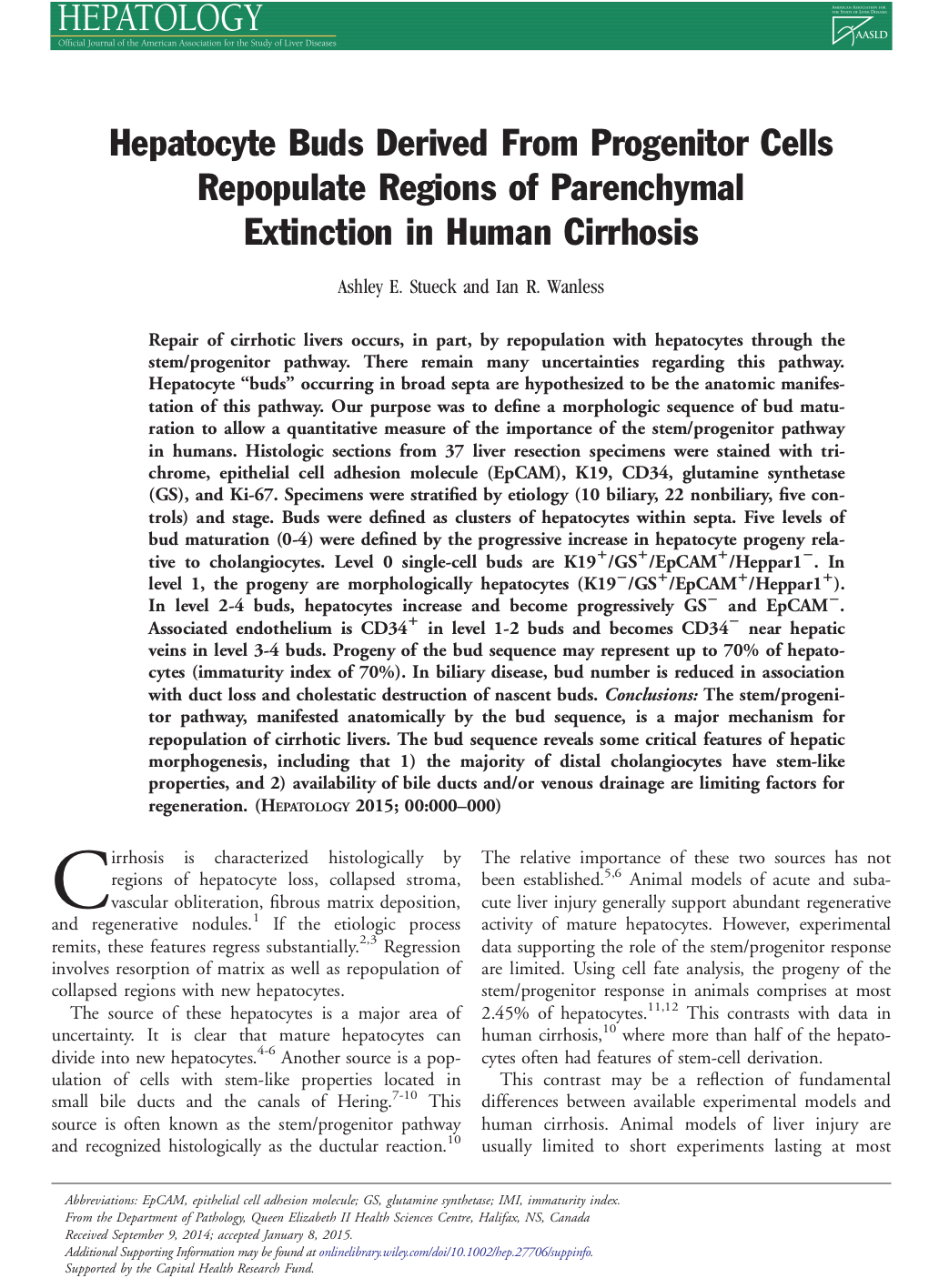 Congratulations to them and to our community  :)))))

Neil Theise
Posted by Suriawinata at 1:18 PM No comments:

New Laennec' meeting is coming.
In order to propose the best (extra scientific) organization for all of you, we asked Luciana Berrebi to help us.

If you have any queries, suggestions, ....,  feel free to contact her.

I received several proposals for the scientific sessions, thanks, other can come.

Posted by Suriawinata at 9:15 AM No comments:

Time is going fast and we received very few titles for scientific presentations.

Following discussion on HCC biopsy, Do we book a specific session ?
If yes, we have to think about a realistic program.
All proposals are welcome.

Editorial on HCC biopsy in Hepatology 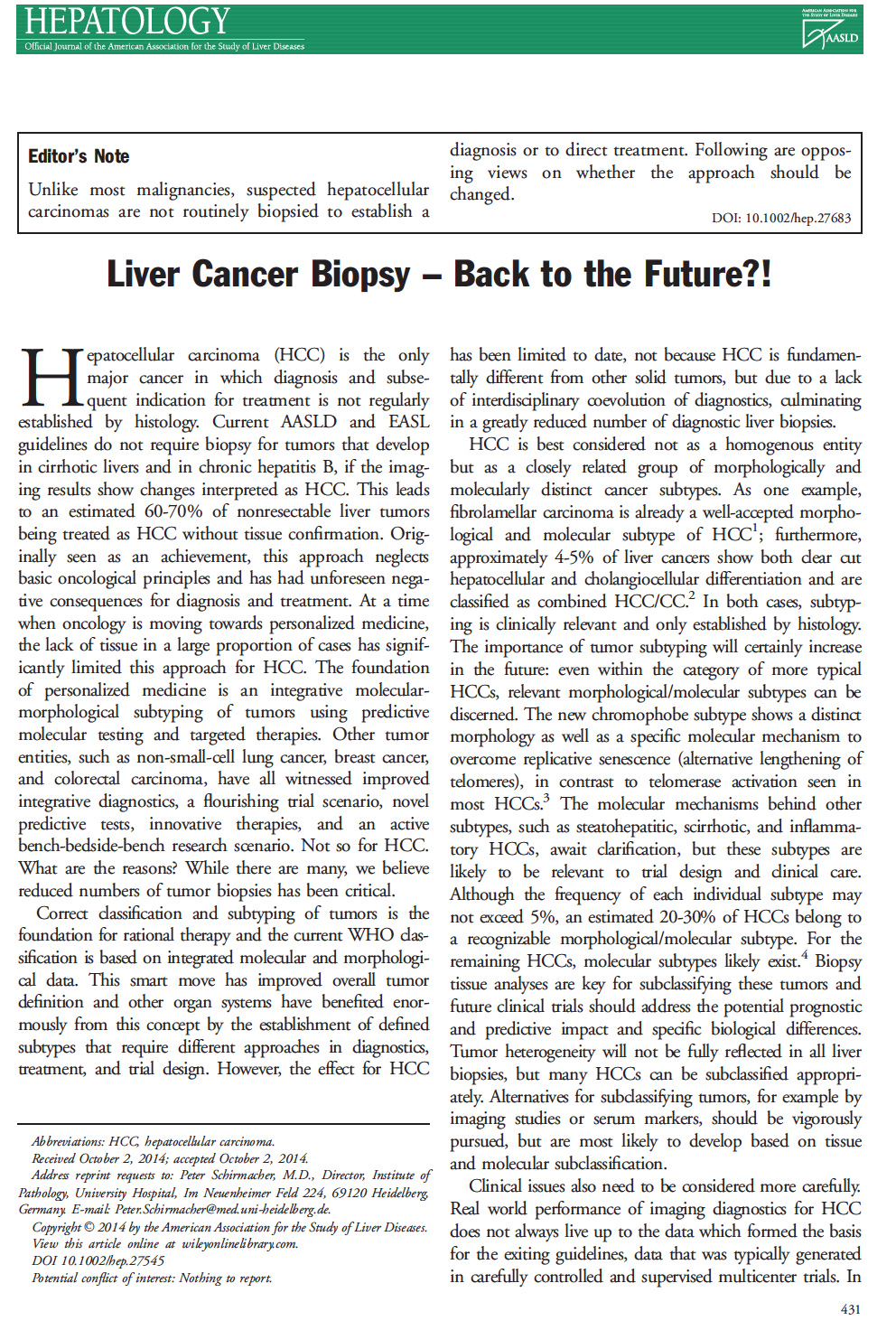 Please see the Hepatology-Editorial (click here or image), Mike and I fought through regarding the HCC biopsy issue (for the cost of an anti-editorial from Jordi Bruix and Morris Sherman). Any kind of support, for example letter to the editor, more/new arguments, or local activities are certainly very helpful and appreciated. Maybe we could also discuss the issue at the next Laennec meeting again? Best wishes
Peter

as promised, I have collected the comments that have reached me regarding the editorial and have tried to sort them (see attached). It may also be used as a starting point for our discussion in Paris – thus I would also like to hand it over to Valerie by this. Mike and I would certainly be very happy if this discussion evolves further for the aim of getting HCC biopsy and fostering the position of liver pathology. Best wishes

Peter
Posted by Suriawinata at 9:20 AM 20 comments:

Boris, a long time member of the Laennec Liver Pathology Society, passed away June 11, 2014 at the age of 90. Boris was born in Düsseldorf. He recalled to me that, at the age of 13, he attended the 1936 Berlin Olympics with his father. He moved to England in the late 1939 where he attended Winchester College, followed by the University of Edinburgh Medical School. After graduation in 1946, he studied and practiced pathology at Hammersmith Hospital in London and the University of Heidelberg. He emigrated to Canada where he was a member of the pathology staff of Dalhousie University in Halifax from 1957 to 1959. He was married on campus in King’s College Chapel. Together, we visited the same chapel during the 2007 Laennec meeting, shortly before his 50th wedding anniversary.

Boris was on the staff of Johns Hopkins University for a decade before being recruited, in 1968, to the inaugural staff of the University of California (Davis). During his long career, he published more than 180 peer-reviewed articles. He was well known for his textbook “Pathology of the Liver and Biliary Tract”, co-authored with Carolyn Montgomery (1982 and 1991). Although Boris officially retired in 1994, he maintained a consultation practice and continued to teach into his late 80s. He was a popular and award-winning teacher. In recognition of his contribution, the Division of Gastroenterology created the Ruebner-Rosenquist Outstanding Teaching Award in 2010.

I was first acquainted with Boris through his writings. While pursuing a project at Johns Hopkins in the 1980s, I reviewed all the autopsy liver slides on file from a period of 80 years and assembled some data. Afterwards, I discovered that Boris had reviewed the same liver slides and had already published similar data.  Boris was always a step ahead of me! We finally met in person at the inaugural planning for the Hans Popper Hepatopathology Society during a USCAP meeting. A few years later, he became one of the founding members of the Laennec Liver Pathology Society. He was present at the first summer meeting in 2000 and every subsequent annual meeting until he was 88. He was a committed traveller and made the Laennec meetings a reason to get about, scrambling over rocks and roots with the fittest. He suffered a ruptured tendon in his mid-80s but continued to press on with the help of great personal tenacity and a stout cane. One memorable summer, at the age of 84, he visited the Hermitage in St Petersburg and returned, travelling alone, with a stop in Nova Scotia to attend the Laennec meeting. From there he took a bus to New York where he boarded his return flight to Davis. He still had the strength to attend 4 annual meetings after that. Travel was a tonic for him, just as his determination was a tonic for us. He was always with us, and now we miss him.

Posted by Suriawinata at 11:17 AM No comments:

Pleased find enclosed the invitation letter for the next Laennec meeting in Paris.
I know that some of you need this letter for their faculty.

Tell me if you have any problem with the hotel like to book your room.

As soon as you know the subject of your presentation, please let me know.

Be free to contact me if you need any help or have any questions.

Our orchid is in full bloom in my mum's garden. Picture taken by Judy.
Wishing everyone a Happy and Healthy New Year, 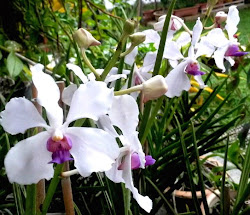